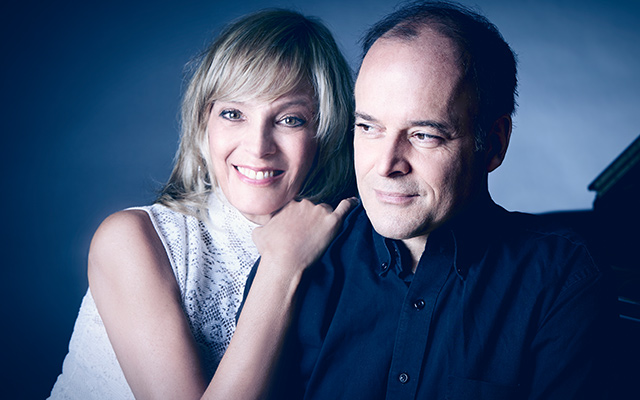 The Lortie-Mercier Piano Duo has a unique longevity based on an intense dialogue between the two Canadian artists who have known each other since their early teens studying in Montreal and in Vienna with the legendary Dieter Weber. They have nurtured a deep love for the art of four hands and two pianos performances and repertoire.

They attracted worldwide attention through their Chandos Records bestsellers: a Ravel disc, and one of Mozart and Schubert masterpieces. Upcoming Chandos recordings for the Lortie/Mercier Piano Duo include the two-piano music of Rachmaninov, the Vaughan Williams Double Concerto conducted by Sir Andrew Davis, Poulenc’s Double Concerto with Edward Gardner and the BBC Symphony Orchestra, and Saint Saens ‘Carnival of the Animals’ under Neeme Jarvi.

The artists have appeared in major venues around the world such as the Berlin Konzerthaus, Leipzig Gewandhaus, Théâtre des Champs-Elysées in Paris, Warsaw Philharmonie, the Teatro Regio of Torino, Conservatorio di Milano, Koerner Hall in Toronto as well as under the baton of such leading maestros as Kurt Masur, Sir Mark Elder, Trevor Pinnock, and Vladimir Spivakov. They have performed with such prestigious orchestras as the Montreal Symphony, the National Arts Centre Orchestra, and the Vancouver Symphony.