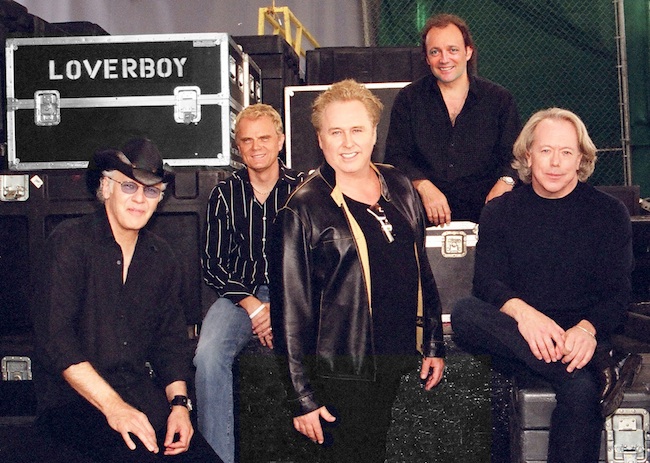 Working for the Weekend, It's Over - Loverboy

When It's Over, It's Your Life - Loverboy

Composer of the Year

Loverboy’s reign as MTV darlings during the ‘80s decade influenced an entire generation of rock fans with their trademark image and live-energy shows. Driven by the powerful vocals of Mike Reno, the relentless rock groove of lead guitarist Paul Dean, the late Scott Smith on bass, keyboardist Doug Johnson and drummer Matt Frenette, Loverboy captivated legions of loyal fans and defined an era of party rock.

Formed out of Calgary, AB, Loverboy signed their first deal with Columbia Records Canada in 1980 and immediately went into the studio with legendary producer Bruce Fairbairn and 2007 Canadian Music Hall of Fame recipient Bob Rock to record their self-titled debut album. Releasing hits such as “Turn Me Loose” and “The Kid Is Hot Tonite,” LOVERBOY flew off the shelves setting record sales for a debut album at the time with over 700,000 albums sold in Canada. Soon after its U.S. release, the album surpassed 2 million copies in North America and 4 million worldwide.

Loverboy struck platinum yet again with their sophomore release, GET LUCKY (1981), featuring the mega party anthem, “Everybody’s Working For The Weekend,”

a song entrenched in popular culture and a mantra for the working masses. From 1980 through 1987, the band released several gold albums and four multi-platinum bestsellers featuring such classics as “Hot Girls in Love,” “When It’s Over” and “This Could Be The Night,” as well as the smash hit “Heaven In Your Eyes” recorded for the motion picture Top Gun.

On stage, Loverboy delivered an unmatched explosion of energy, skill, style and showmanship that established the group as one of rock ‘n roll’s greatest live acts, not to mention the reputation as one of the hardest working bands around. Loverboy played more than 200 shows in 1980, embarked on an eight-month world tour in 1983 to promote their third album KEEP IT UP, and hit 100 cities across North America with the release of the band’s fourth instalment, LOVIN’ EVERY MINUTE OF IT (1985).

The band catapulted to become one of the top five grossing touring acts and was the first Canadian group to be awarded Columbia Records’ Crystal Globe Award for selling over 5 million records outside their native country.

After a decade of success the band took a much-deserved break, but soon took back to the stage for a benefit concert in 1992 for friend and fellow recording artist Brian ‘Too Loud’ MacLeod. Music fans and industry professionals were blown away by Loverboy’s performance, prompting the band’s decision to tour again, playing over 100 shows annually.

At the start of the new millennium, the band suffered a tragic loss when founding bassist Scott Smith lost his life in a boating accident and was declared lost at sea on November 30, 2000. The surviving members came together, with the introduction of new bassist Ken “Spider” Sinnaeve, and dedicated the live release album of their greatest hits, LIVE, LOUD & LOOSE to the memory of Smith.

In 2005, Loverboy marked their silver anniversary. To celebrate the milestone, the band embarked on a North American summer tour performing their greatest hits over the last 25 years, and took the opportunity to introduce their fans to some new songs that they’d been experimenting with. The audience response to Loveryboy’s new material was overwhelmingly positive and inspired the band to return to the studio after more than 10 years.

Their tough-rocking 2007 release, JUST GETTING STARTED, marked a creative new chapter in the long history of Loverboy –– a legendary group that has sold over 20 million records worldwide and touched generations of music fans. The band continues to tour on average of 60 to 80 shows a year across North America, testimony of their lasting popularity and longevity in the music business.