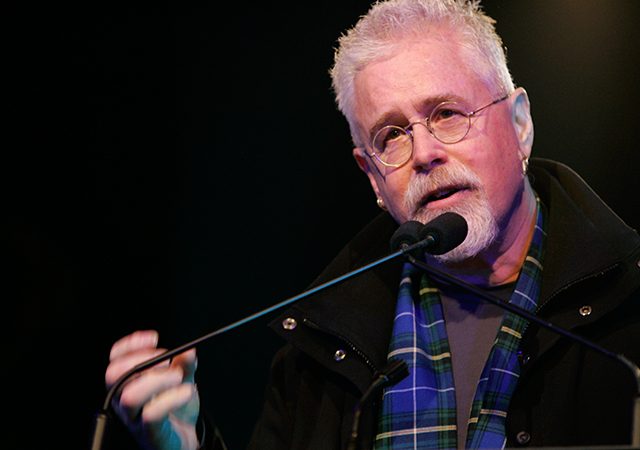 Folksinger of the Year

Folksinger of the Year

As one of this country’s most celebrated and respected artists, Cockburn is known for his political lyrics and calls for social justice. His career spans more than 35 years. Throughout this time, he has worked tirelessly alongside such groups as the USC (Unitarian Service Committee), OXFAM and Friends of the Earth to raise awareness of the need for humanitarian and environmental relief. He is also a supporter of Amnesty International and numerous other advocate groups.

His devotion to social and environmental issues crystallized in 1983 with an eye-opening trip to refugee camps in Central America on behalf of OXFAM. Since then, Cockburn has traveled extensively on many fact-finding trips including Cambodia, Vietnam, Chile during the Pinochet Dictatorship, Honduras, El Salvador, Kosovo, Nepal, Nicaragua, Mozambique, Somalia and most recently war-torn Baghdad.

Since the mid-nineties, Cockburn has been among the leaders that have lobbied for the movement to ban landmines. He has also been at the forefront of efforts to obtain justice for North America’s Aboriginal peoples. During the ‘80s, he was involved with the Haida Nation’s quest to stop the logging in the Queen Charlotte Islands, helping to raise funds for the legal expenses needed to defend the Haida’s land claim. Other involvements include the campaign for a treaty with the Lubicon Cree in Northern Alberta and the Innu people’s struggle to stop NATO over-flights in Labrador.

His political activism has not only influenced government but also continues to resonate with his fans. Cockburn has written countless songs on a variety of political issues ranging from landmines to famine. Many of his best-known songs are of a political nature including “If I Had a Rocket Launcher”, “A Dream Like Mine”, “Call It Democracy” and “If A Tree Falls”.

The Ottawa native has been a spokesperson for the USC since the seventies, and is also a past Honorary Chair of Friends of the Earth Canada.
In 1983 Cockburn was honoured with The Order of Canada, and was further promoted within the Order in 2003. In 1998, he was recognized with The Governor General’s Performing Arts Award.

Cockburn’s other accolades include an honourary doctorate from the prestigious Berklee College of Music in Boston, and an honourary degree from both York University in Toronto and St. Thomas University in Nova Scotia. In addition, he has also received a diploma from the Royal Conservatory of Music.